The Mayor of Dudley joined businesses and community champions to help raise more than £3,900 for charity at her annual ball.

Mayor Councillor Millward praised everyone involved in the event which saw an auction, raffle, games and other activities to raise cash.
The event also included the Mayor’s Civic Awards where people who have done “wonderful things” in the community.
Businesses at the event included sponsors such as Merry Hill, Sharp, Jewson, Excel 2000 Windows, SF Harrison Roofing, Copthorne Merry Hill and Aebi Schmidt.
The event raised £3,900 which will be split between the Mayor’s chosen charities – Black Country Mental Health and Duke of Edinburgh Awards. 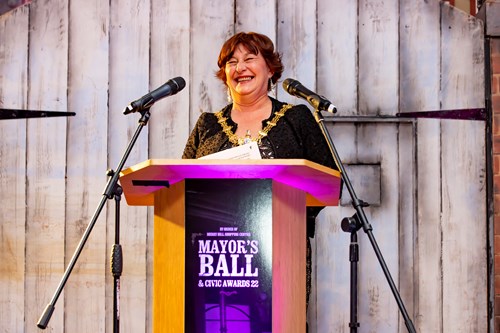 I am delighted we were able to raise so much money for these two charities – without help like this they simply would not be able to continue their excellent work. I am so proud of the way businesses and communities came together on the night to raise this amount.

It was a fabulous night where I also got to meet some incredible winners of our Civic Awards who do wonderful things in their communities – the amount of money raised for charity was the icing on the cake.

The event was held at the Copthorne in Merry Hill on Friday (April 8)and was attended by more than 300 guests including deputy Mayor’s from Sandwell and Walsall as well as Deputy lieutenants for the West Midlands.

To find out more about the Mayor and her charity work visit https://www.mayorofdudley.org.uk/