Tickets on sale for Mayor’s ball

Tickets are on sale now for the Mayor of Dudley’s ball and civic awards, due to be held next month.

The event, which brings people and businesses together for an evening of celebration, will take place at the Copthorne Hotel on Friday October 8 after being postponed last year due to the pandemic.

During the evening, the winners of the 2020 civic awards will be announced and they will finally be able to enjoy and celebrate their achievements.

Former Mayor of Dudley, Councillor David Stanley will be there to present the awards along with the current Mayor, Councillor Anne Millward.

There will be a charity auction and entertainment throughout the evening including a performance by Michael Bublé tribute Michael Clews. 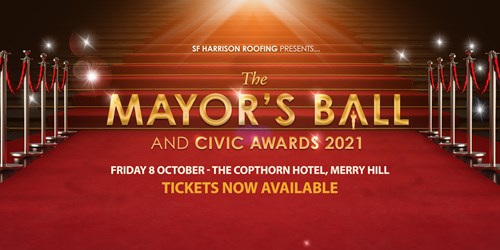 This event is a wonderful opportunity to bring people from our communities and local businesses together to celebrate all that’s good about the borough.

Although a large part of the evening is about the achievements of our civic award winners, it’s also about asking people to support Councillor Stanley’s Mayoral charities, who will benefit significantly from any money raised during the evening.

I’m delighted we’ll finally be able to announce the winners of last year’s civic awards. As we were unable to go ahead with the event as originally planned during my time as Mayor, it’s an honour to attend this event and keep the nominees in suspense no longer.

The event will a drinks reception at 6.45pm followed by dinner at 7.30pm.

Tickets cost £40 per person and are available to book online at https://www.eventbrite.co.uk/e/mayors-ball-and-civic-awards-tickets-89253418377