Tobacco crime – not to be sniffed at

The enforcement was part of a larger local Trading Standards initiative within the Central England Trading Standards Authorities (CEnTSA), where more than seven million illegal cigarettes and 478 kg of hand rolling tobacco was seized, with a loss to the taxpayer of nearly £2million. 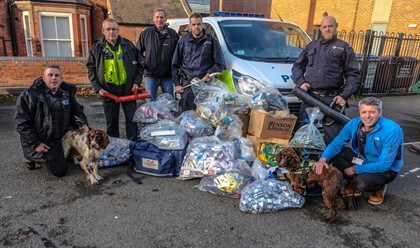 The Dudley borough seizures took place across seven shops between April 2017 and March 2108. More than 150,000 cigarettes and 1,000kg of hand rolling tobacco was confiscated, two prosecutions have concluded with several more pending.

The total retail value of the illegal goods in central England is estimated to be worth in excess of £3million.

The illegal activity is often well hidden in sophisticated concealments, which are difficult to detect without the aid of specialist tobacco sniffer dogs.

All offending businesses are subject to criminal investigation. Some have received financial penalties, others have been given suspended prison sentences and community orders. In addition, some shops have had their alcohol licences suspended or revoked for dealing with illegal tobacco products.

Far from being a victimless crime, illegal tobacco trade creates a cheap source for children and young people and although people may think they are getting a ‘good deal’ they are actually supporting organised criminal gangs.

Whilst all tobacco is harmful, the illegal tobacco market, and in particular the availability of cheap cigarettes, undermines government health policies aimed at reducing the cost to the NHS of treating diseases caused by smoking.

The loss to the taxpayer means less money being spent on local communities, schools and the NHS and I would urge any residents who have concerns to get in touch with our excellent trading standards

Retailers are becoming increasingly sophisticated in their approach, adapting their methods in order to avoid detection. Some businesses had gone to great lengths to conceal the illegal tobacco in secret compartments, including hydraulic lifts in floors, false walls and fridges. You may hide it, but we will find it.’

Illegal tobacco products can usually be easily recognised. They will be very cheap, often less than half the price of legitimate packets and often have foreign writing on them.

CEnTSA brings together 14 local authorities from the Central Midlands area, aiming to maximise the impact individual services have by establishing and maintaining good working relationships with a wide range of regional business partners, supporting businesses in the region and by promoting economic growth.