Scores of people gathered in Dudley town centre to celebrate the life of the town’s most famous son at the first ever Duncan Edwards Day.

The event, organised by the Duncan Edwards Foundation with support from Dudley Council, was held today (Monday) on the footballing legend’s birthday.

The former Manchester United and England legend’s life was tragically cut short in 1958, aged just 21, when he died as the result of the injuries suffered during the Munich air disaster.

He would have been 82 today.

A choir of youngsters from Duncan’s old school – Priory Primary – entertained the crowds with a few songs before Ewan Baggott, a Black Country lad who is the resident football freestyler for Wolves, showed off his skills with a football on stage.

Members of Duncan’s family were present including his cousin, Keith, as entertainment was also provided by Black Country wench Marlene. Former Wolves star Mel Eves, an ambassador for the Duncan Edwards Foundation, was also there.

The Mayor of Dudley, Councillor Alan Taylor, laid a wreath at the foot of Duncan’s statue in remembrance on his birthday. 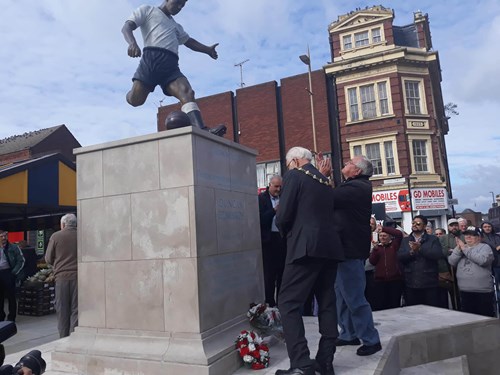 There was also due to be a variety show held tonight (Mon) in Duncan’s honour at the Station Hotel.

It was an honour to be at the first-ever Duncan Edwards Day.

I was playing football around the same time as Duncan – although nowhere near as well – so I can speak first-hand as to how good he was. He was an unbelievable player.

I hope this day will now go on to become an annual event, and a continual reminder to future generations of Duncan Edwards and all he did for this town.

It was great to see so many people turn out for this, and particularly pleasing that so many of Duncan’s family were present.

It was a clear sign that people in Dudley want Duncan to be remembered and to be celebrated, and today was what that was all about.

He was a footballing legend and we will continue to shout proudly about everything he achieved.

For more information about Duncan Edwards Day, or about the work of the foundation, visit www.duncanedwardsfoundation.co.uk