The Mayor of Dudley has today unveiled a tribute to a former borough headmaster who dedicated much of his career to serving a local school.

Stan Grange, was the headmaster of Mount Pleasant Junior School in Coseley from 1938 to 1967 and taught generations of local school children.

The school, which later was used to house the borough’s archives collection underwent a major transformation a couple of years ago when it was converted it into sixteen stunning new Dudley Council homes as part of a wider housing project. 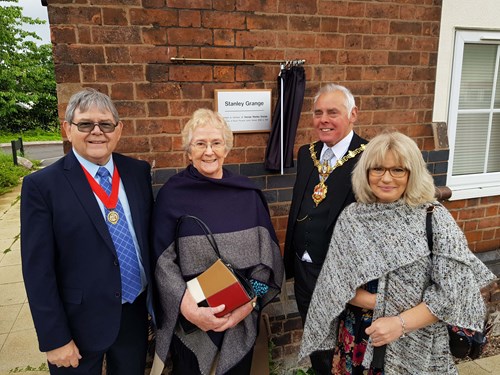 The development has been renamed Stanley Grange, in memory of Stan and today (Friday June 14), the Mayor was joined by Stan’s daughter Valerie Pattinson and granddaughter Julie Pattinson as he unveiled a plaque in his honour.

They were also joined by Honorary Alderman Melvyn Mottram, an ex-pupil who was instrumental in ensuring the building was named after Stan as well as Dot Melbourne, a teacher who worked with him and former pupils Chris Marks and Paula Morris.

It was honour to be meet members of Stan’s family today as well as his former colleague and ex-pupils as we acknowledged the contribution he made to the school and the surrounding community.

From conversations we’ve had today, I got a sense of what Stan was like as a headmaster and how much he was respected by teachers and pupils alike. I’m pleased his name will be forever linked to the building for which he spent almost 30 years

My family and are thrilled that my father’s role at Mount Pleasant Junior School will be forever remembered. He was incredibly proud to be the school’s headmaster and this is a fitting tribute.

Away from school, Stan enjoyed a full social life, including being involved in St John’s Ambulance, playing rugby and being a founder member of Dudley Kingswinford Rugby Club.  He was also involved in amateur dramatics and produced plays for the local community.

The Victorian school opened in October 1879 and closed its doors in1986, later becoming the home of Dudley Council’s archives service.

The architectural features of the former school have been preserved during the conversion, with the contractors salvaging and recycling original features including the original boys’ and girls’ entrances.