Jason Manford is to perform his latest tour show at Dudley Town Hall for a third time – as he revealed his love for the venue and for Black Country folk.

The TV comic will put on Muddle Class on Saturday March 9 next year, with tickets for the new date going on sale at 10am tomorrow. (Thu) 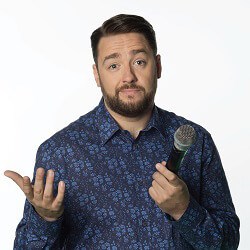 Manford performed the show to a sell-out 1,000-plus crowd at the St James’s Road venue last month.

He took to Facebook during the interval of that show to post: “Great first half in Dudley tonight, love this room, the laughs come so big and loud they can surprise you. Top folks here in the Black Country.”

The popular comic already had a second date booked in for October 3 which is also selling really well, with just a few tickets remaining.

We're delighted to announce that Jason Manford will be returning to Dudley Town Hall in March with his brilliant 'Muddle Class' tour show.

This will be Jason's third date in Dudley on his current tour.

He clearly enjoys playing to our brilliant Black Country audiences, and we love having him here!”

Manford has hosted The Nightly Show and Bigheads on TV in the last 12 months, and has also appeared on the likes of Live At The Apollo, Sunday Night At The Palladium and The Royal Variety Show.

Tickets for Jason Manford: Muddle Class for March 9 cost £27.50 plus booking fees and are available by logging on to www.boroughhalls.co.uk or calling the box office on 01384 812812.