A leading charity, a youth football boss and a school governor were among the winners of this year’s prestigious Mayor of Dudley Civic Awards.

The awards were presented to “unsung heroes” from across Dudley borough at the annual Mayor’s charity ball tonight (Friday April 5), in association with Lapal House care home. 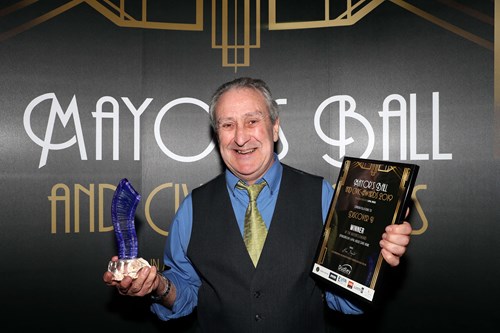 Steve Smith from Discover U, winner of Mayors award 2019

Discover U, a charity which provides work-related experience to adults with learning and physical disabilities in Wollaston, won the Mayor’s Pride of Dudley award after receiving the most votes from the public in an online poll. The runners up were Side By Side Theatre Company, which helps adults with learning disabilities take to the stage, The Giving Hands Mission which runs a day centre in Brierley Hill and Stourbridge Street Pastors which provides help and support to people in the town centre at night.

The winner of the Duncan Edwards award for sport, sponsored by Excel 2000 Windows, was Carl Bottley who is manager and trainer of Netherton Colts, something he has done for 20 years.

Former English middleweight boxing champion Darren McDermott won the runner-up award for his work getting people into the sport.

Paul Greenaway, chairman of Cotwall End Nature Reserve, won the William Shenstone award for environment, sponsored by Jewson, for his work at the green space. The runner-up award went to Kaye Highway, who is a member of the Abbey Street Park Friends group.

The winner of the Thomas Attwood award for education, sponsored by Lapal House care home, Gillian Withers who has been a school governor at Hurst Green Primary school and Leasowes High School for more than 30 years. Stanley Williams, who has been a supporter of Oldswinford Church of England Primary School for 30 years, won the runner-up award.

Arts Space, which runs arts courses and classes on the Cedric Hardwicke award for art, sponsored by GMB Union. The runner-up prize went to Margaret Davis who has been involved with Hurst Hill Pantomime Players for many years.

The Frank Foley award for community spirit, sponsored by Copthorne Hotel, Brierley Hill, went to Scott Round who volunteers in his local community in Coseley by tidying gardens and delivering community newsletters. Michael Taylor, who has been a blood donor for 50 years won the runner-up prize.

The evening also raised thousands of pounds for the Mayor’s charities for this year which are Headway Black Country, White House Cancer Support and the Hope Centre.

Rt Revd Graham Usher, the Bishop of Dudley, who was one of the guests, said:

It’s always inspiring and very moving to see these people, who go above and beyond in their communities, get the recognition they deserve. We have some amazing stories of how people have been working tirelessly in their communities to make this borough a fantastic place to live.”

What a fantastic evening celebrating the hard work of people in communities across the borough, and raising money for some very worthwhile causes. It was a real privilege to be part of the night.”