Very Light Rail back on track as council secures £13m

Very Light Rail is back on track in Dudley – after the government answered a plea to meet a near £13 million shortfall in funding for the scheme.

Council leader Patrick Harley - in partnership with the Black Country Local Enterprise Partnership (LEP) and supported by the West Midlands Combined Authority - urged ministers to step in and support the next phase of the project. 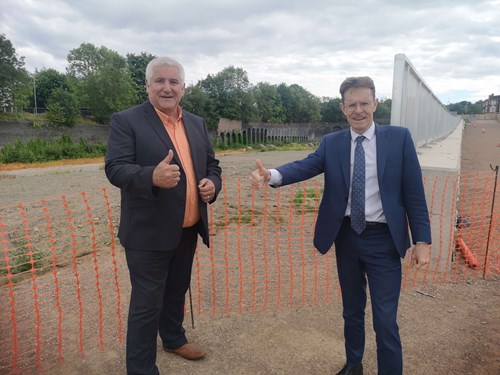 It will put Dudley on the national map as a pioneer of the latest technologies. Earlier phases have benefited from funding contributions by Coventry City Council - a key partner to the project - and the Black Country LEP.

Councillor Harley wrote to Robert Jenrick MP to say the whole scheme, which includes plans for a test track and National Innovation Centre (NIC) at Castlegate, was “under threat” unless the cash could be found.

And Mr Jenrick, the Secretary of State for Housing, Communities and Local Government, has contacted the council this week to confirm the government will be contributing £12.35 million towards the shortfall. The balance of funding required will come from the Black Country LEP.

I am absolutely delighted – I asked for this to be treated as the highest of priorities by the government and they have come through for us.

The Very Light Rail Test Track and National Innovation Centre (NIC) is a key project for our borough.

It will offer an innovative and exciting opportunity to provide lower cost local rail connectivity, encouraging shift from private vehicles towards public transport.

It will put Dudley on the national map – and with the money in place, things will now start to move quickly to deliver it.

Andy Street, the Mayor of the West Midlands, said:

At a difficult time for the West Midlands’ economy brought on by the coronavirus pandemic, it is great to see the Government putting further cash on the table to help aid our recovery.

This £66m from the Getting Building Fund will go towards exciting, shovel-ready, projects across the region that will make an immediate difference by helping to create and secure local jobs for local people.

In Dudley, Very Light Rail is a critical project that will help offer lower-cost rail connectivity across the West Midlands, helping to both encourage people out of their cars and tackle the climate emergency we are facing. It is great to see the Government getting behind this scheme and helping to push it over the line.

As well as an immediate investment to help our local economy, the money provided by this fund is also an investment in our future, to secure the West Midlands’ place as a global leader in green and clean technology, life sciences, transport of the future, and construction.

This announcement is just one part of our much bigger plans to reset, recharge and rebuild the West Midlands economy by investing in the future and retaining current jobs and creating new ones.

This investment from Government will see a boost to the whole West Midlands economy. Here in the Black Country we are ready to go with the Very Light Rail Innovation Centre, with timescales in place to ensure quick delivery.

The project will create jobs, see investment in business and support skills development across the area as well as provide an opportunity to showcase the innovative skills already here in the Black Country.

We look forward to working with all our partners to see the full range of projects take shape as we continue to drive economic growth locally and regionally.