An engaged couple are looking forward to the wedding of their dreams after winning a £390 free ceremony at an open day.

Wendy Toy, 57, a sewing machinist and Simon Kelly, 53, both from Kingswinford, have been announced as the lucky twosome. Their names were pulled out of a hat in a free prize draw at Dudley’s Priory Hall wedding fayre on Saturday March 2. 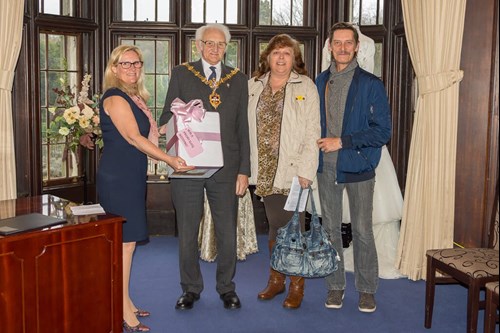 Wendy said: “I couldn’t believe it when we were told that we had won.  We had such a lovely day at the wedding fayre anyway, and then when we found out that we were the winners my chin hit the ground, it was amazing.

“We have booked our wedding to take place in April, and I have already spent this extra money we’ve not had to spend on the ceremony on an entirely new wedding dress.  It’s one of the best things that could have happened.”

Around 300 people attended the annual event, which showcased the beautiful Grade II building and grounds, and offered visitors tips and information from exhibitors on every aspect of a wedding, from clothes and cars, to entertainment.

This time the mayor and mayoress were re-married in a demonstration wedding to show attendees what their special day will be like.”

Also new for this year was a popular demonstration of the recently launched sand ceremony, which allows happy couples to pour different coloured sand into a frame to create a keepsake, symbolising the merging of two individuals into a blended pair.

The grade II-listed register office is in Priory Park, which features the old Priory ruins and is overlooked by Dudley Castle.  For more information on booking a ceremony at Priory Hall people can call 01384 815373.