Dudley Council has been praised for creating the building blocks of a new Metro line in the Black Country and Birmingham.

The leader of Dudley Council today welcomed a number of key figures for the project including the Mayor of the West Midlands, as they visited Dudley town centre where work to build a large retaining wall has begun. 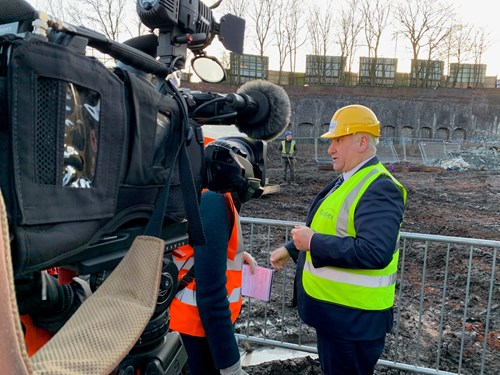 Councillor Patrick Harley, leader of Dudley Council, talking to the press about progress of building works for the new Metro line

The wall at Castle Hill, is the first physical structure as part of Dudley’s Metro connection plans, a key component of Dudley Council’s major regeneration project for Dudley town.

The wall is currently being built with money from a £4.3m grant agreement funded from the West Midlands Combined Authority with completion expected this summer. Construction work to the line is due to begin later this year. 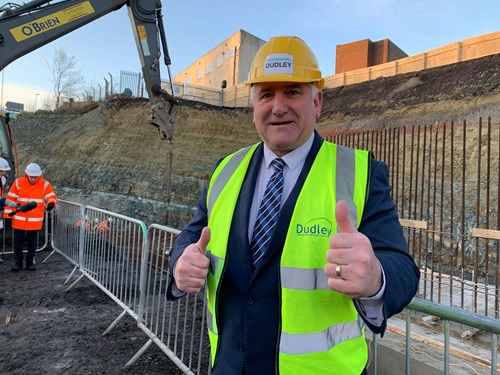 It is a pleasure to showcase some of the great wok that is happening here in Dudley as part of the Metro line and Very Light Rail project. This is a huge time in Dudley’s regeneration story and demonstrates it is our time to build, connect and grow.

Working with our partners we are delivering the biggest changes our borough has ever seen and this investment brings a new metro line, shops, homes, offices, leisure centre plus much more to the people of our borough.

The delivery of the Metro programme forms part of an exciting larger £1bn regeneration programme that is expected for Dudley town centre.

This is the first piece of building work to get Dudley ready for the construction of the new tram line.

This Wednesbury to Brierley Hill extension will bring new investment and regenerate this part of Sandwell and Dudley as well as giving local people easier access to jobs and opportunities across the wider region.