Work to topple “mattress mountain” in borough up for award

Dudley Council has been shortlisted for a prestigious national award for toppling the “mattress mountain” in the borough.

The local authority is up for Best Partnership of the Year in the LARAC (Local Authority Recycling Advisory Committee) Awards.

The annual event, now in its twelfth year, recognises the achievements and hard work of council waste officers and their colleagues and partners during the past 12 months.

The nomination is for the council’s work with emerging Shrewsbury-based recycling company Textek. The firm use revolutionary new methods to make it easier to recycle mattresses and other large bulky items, stopping them from going into landfill. 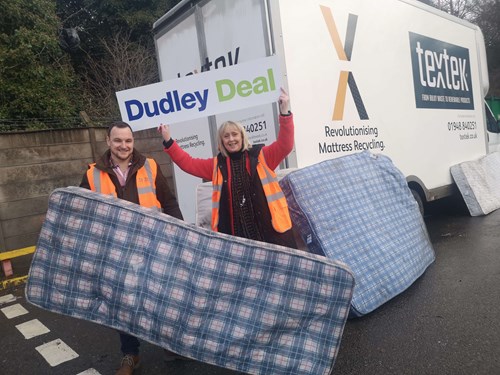 Textek has developed the first bespoke mattress shredding line, which enables the successful separation of the flock from the steel and ensures 100 per cent of the mattress can be recycled.

On average a skilled person can strip a mattress in around seven minutes, but the residual products require further processing to enable their reuse. The Textek shredding line is able to dismantle a mattress in under 30 seconds.

As a result of the partnership, the price for doorstep collection of mattresses, bed bases, carpets and underlay for residents in the borough was greatly reduced.

Textek collected 1,696 items from homes in Dudley between January and June this year, equating to just under 55 tonnes.

I am delighted with this award nomination, which has come about as the result of excellent partnership working.

Before we started working with Textek we had a real problem with mattresses being piled high at the tip, and with no other real option but to put them into landfill.

The results speak for themselves. The kerbside service is now much more affordable and it has proved really popular.

It is generating real results in terms of both boosting our recycling rates, which were already very good, and reducing the amount we are sending to landfill.

We worked hard to get this great partnership working between the council and Textek to achieve great results in reducing landfill, whilst reducing the costs of the doorstep service for our residents.

I really hope that we are successful in winning the award, which would be a wonderful recognition of what you can do differently to achieve so much more.

Judged by a panel of experts from across the waste management industry and local authorities, the awards will be handed out at the virtual LARAC conference on October 14 and 15.