Young people taking part in a Prince’s Trust programme have helped plant more than 1,000 trees while on work placement at one of the borough’s national nature reserves.

Saltwells National Nature Reserve welcomed nine young people aged 18 plus from The Prince’s Trust ‘Get into Woodlands Programme’ for the last four weeks.

They are the second group of young people from the trust to be on placement at the Dudley Council run reserve, which is part of the Black Country UNESCO Global Geopark.

During their placement the group helped plant trees as part of the Queen’s Canopy project at Dudley Wood Primary School and around Saltwells.

They also worked alongside wardens and volunteers learning all about how to manage open spaces and considering whether it’s a career they want to pursue.

The young people carried out woodland management, including small tree felling, coppicing and scrub removal, have learnt about the importance of geo-conservation and also looked at risk assessments, management planning and environmental legislation.

They’ve helped to progress the work carried out by the first group, which exposed a geological feature of a rock face that had been hidden for many years. The rock face included layers of sandstone, which had formed in an ancient river mouth 420million years ago.

Along with volunteers of Friends of Saltwells Nature Reserve, the second group of young people continued to remove debris to reveal more of the hidden rock layers and features. These can be seen along Blackberry Way, the path leading from the bend in Highbridge Road, by Netherton Reservoir, that leads to the Dudley No.2 Canal. 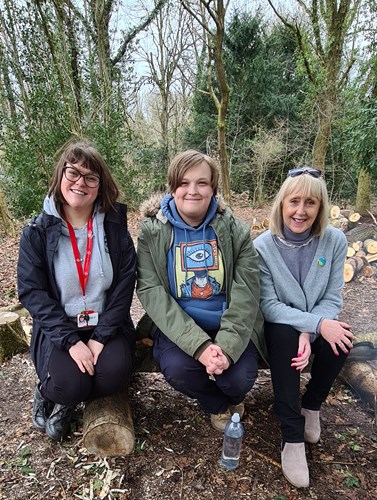 Ross Pennington Greatbatch, one of the young people who took part in the programme is pictured centre with Sarah Taylor from the Prince's Trust (left) and Councillor Karen Shakespeare (right).

We’re thrilled to have worked alongside The Prince’s Trust and welcome this second group of students to Saltwells.

In a short space of time they’ve learned a lot about what it takes to work within the natural environment and have had a real positive impact, from helping to plant trees and learning why it’s important to plant native species to progressing the geo-conservation work on site.

I was delighted to meet the group on site and hear about their experiences. We’re incredibly proud of what they have achieved and we hope their time at Saltwells encourages them to consider a career in nature.

The Get into Woodlands programme has provided some fantastic opportunities for our young people and has given them a great insight into the sector.

The young people have gained valuable new skills including basic tool use, tree identification and woodland management that will aid them in finding employment within the field.

Alongside this, they have made new connections within the community, improved confidence and discovered a new passion for their local area. Overall, the programme has been a great success and has certainly inspired the next generation of conservationists.

The Get into Woodland programme was funded through DEFRA with support from the Heritage Lottery Fund.