Blue plaques in the Borough

She met her husband Leonard Allen while working at Hackett Brothers’ nut and bolt works in Victoria Street and they were married in 1926 at Stourbridge Register Office.

It was at the age of 69, in 1975, that Ray Hingley invited Dolly to join the team of the Black Country Night Out. She was an instant hit and from that came records and appearances on television and radio.

Her plaque is located at Brierley Hill Civic Hall and was erected June 22nd 2008.

Dainty was born at Wolverhampton Street, Dudley, the son of a shopkeeper who was based in a shop at the front of the family home.

His plaque is located at Dudley Concert Hall and was erected on 21st January 2007. 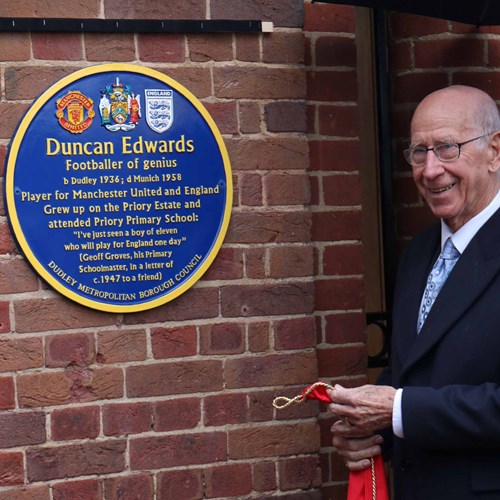 England and Manchester United football legend Duncan Edwards was born on Thursday 1 October 1936 in Dudley, in the heart of the Black Country.

The big number 6, who was 5ft 10" and weighed just under 13 stone was nicknamed ‘The Tank’. He played at wing half but could also play centre half, centre forward and inside forward.

Duncan was one of the Busby Babes, the young United team formed under manager Sir Matt Busby in the late 1940s.

He was one of the eight players who tragically died from injuries sustained in the Munich air disaster on Thursday 6 February 1958. Aged just 21, Duncan died 15 days later on Friday 21 February in the Reichts der Isar Hospital in Munich. 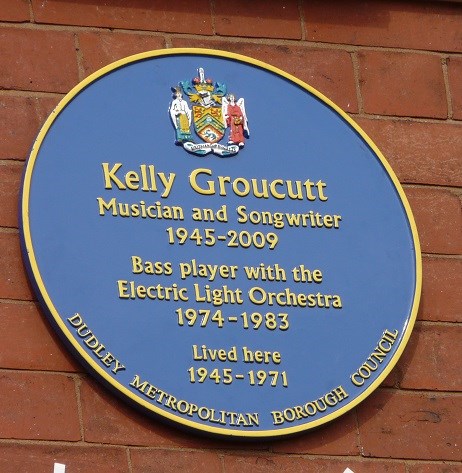 Kelly Groucutt was a bass player with the Electric Light Orchestra who enjoyed international stardom, as well as hit singles, albums and sell out tours over 40 years.

The musical star was born and grew up in the house on Gough Road, Coseley which is where the blue plaque is sited.

Kelly and band members were internationally known and followed and from the 1970s enjoyed hit singles, albums and sell out tours.

Hardwicke was born in the village of Lye was a notable English actor. Hardwicke is remembered by a sculpture by Tim Tolkien at Lye, commissioned by Dudley Council.

The memorial takes the form of a giant filmstrip, the illuminated cut metal panels illustrating scenes from some of Sir Cedric's best-known roles. It was unveiled in November 2005. He also has a star on the Hollywood Walk of Fame. 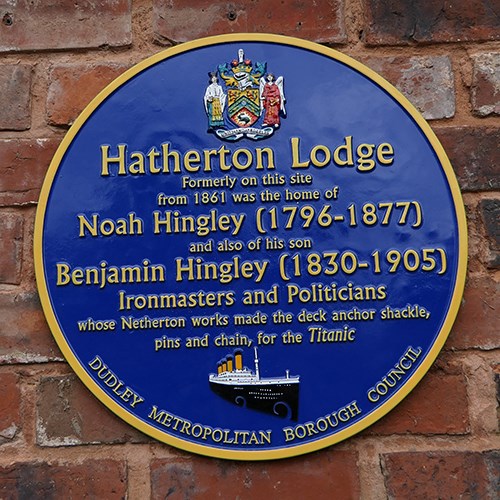 Hatherton Lodge was the home of the Hingley family from 1861, local ironmasters and politicians.

Noah Hingley (1796-1877) and later his son Benjamin Hingley (1830-1905) resided there, and founded the Hingleys works in Netherton, where the Titanic deck anchor was famously assembled, in 1910.

Hingleys made the shackle, pins and chain, whilst the shaft was made at the Walter Somers forge in Halesowen, and the side arms in Newcastle. The anchor was the largest in the world at the time, 18ft 6 inches long and weighing over 15 tons.

The plaque was unveiled on the gatepost of the former Hatherton Lodge, all that remains of the former home of the local industrial and political dynasty. The buildings and land on Drews Holloway, Cradley had been standing derelict and in disrepair and have recently been used to develop seven four-bedroom houses, with the site owner, Mr Field retaining the gatepost and sponsoring the blue plaque to mark the significance of the site. 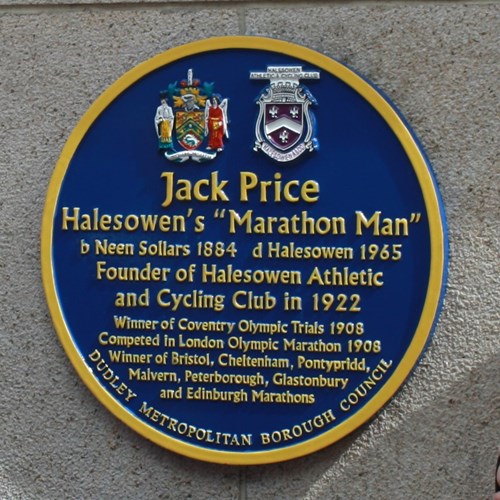 After winning the 1908 Midland Olympic Marathon Trial (25 miles) in 2-37:13, Jack Price was rated a strong contender for the Olympic title at the 1908 London Olympic Games. At the halfway mark, Price led the field by 200 yards, but his quick early pace forced him to retire soon afterwards.

He was ninth for England in the 1909 International Cross-Country and then turned professional, winning the 1910 Powderhall Marathon on his pro début. Later that year he set a world professional record for 15 miles.

In 1922 he formed the Halesowen Club where discovered and trained Eddie Webster. Jack was among the foresighted group of people who purchased the land off Manor Way which is now home to the Athletics and Cycling Club.

Born in Dudley, Worcestershire in 1890 as Arthur C. Rose. He began his career as “A.C Rose- Comedian”, making his first appearance on stage in 1905 at the Mechanics Institute, Dudley. And later forming his own concert party. He was later to present his own Summer Show “Twinkle” at seaside resorts for over forty years.

His plaque is located at Dudley Concert Hall and was erected 21st January 2007. 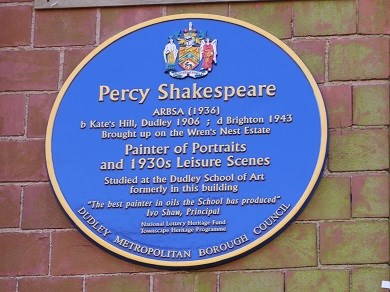 Percy Shakespeare (1906 – 1943) was an immensely talented locally born artist from Kates Hill, Dudley. He is famous for his flowing but precise figure drawing technique, his powerful portraits and a series of pictures depicting 1930s leisure activities, such as tennis, bathing, boating, cricket, an afternoon at the Ice rink and most famously, a visit to the Tropical Bird House at Dudley Zoo.

His plaque is located on the former Art Gallery in St James's Road, Dudley.

An English poet and one of the first developers of landscape gardening through the development of The Leasowes, which was his estate.

His plaque is located at the entrance to Halesowen Golf Club near the Leasowes and was erected 15th November 2007.