Applications are still open for the discretionary energy support fund.

If you have not received your £150 Energy rebate payment contact us urgently at energyrebate@dudley.gov.uk

Litter makes the borough look unattractive and can cause further problems like attracting pests.

For many people litter is the most important issue of the local environmental quality agenda, as it is the most widespread blight of our public spaces. It is costing councils half a billion pounds annually to clear it up.

We don't clear litter or investigate complaints from privately owned land or from an area outside of the borough.

It's a criminal offence to leave litter under section 87 of the Environmental Protection Act 1990. A person is guilty of the offence if they throw down, drop or otherwise deposit, and then leave, any litter in a place to which the section applies, namely all land that is open to the air, including private land and land covered by water. The only defences are that the act was authorised by law, or done with the consent of the owner or occupier of the land.

The Act provides no definition of litter, although the courts have interpreted it to be wide and encompassing. The Clean Neighbourhoods and Environment Act 2005, has removed any previous ambiguity by explicitly stating that litter includes smoking and chewing gum related material. In reality, the most common forms of litter relate to smoking, eating and drinking.

If you wish to provide supporting photographs when reporting litter that needs clearing up, can we ask that you include photographs like the example below. 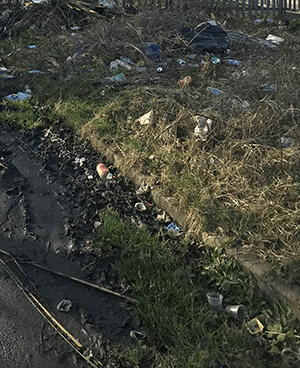 If you report a problem relating to litter scattered on a public highway or over a public open space under our control, we have a certain amount of time to bring it back to a reasonable condition, depending on where the problem is.  Response times are detailed in the Environmental Protection Act 1990.

Where land is privately owned, the Planning Enforcement Section can investigate enquiries about an untidy condition of the land and where its condition adversely affects the amenity of the area.

If negotiations fails, the Council can take formal by using its general planning powers to serve a Section 215 Notice on the owner (or occupier) of any land or building whose condition is adversely affecting the amenity of the area, particularly within a conservation area. Such a notice requires the person responsible to clean up the site or building, or the local authority can carry out the work itself and reclaim the cost from the owner. Section 215 is a relatively straightforward power that can deliver important, substantial and lasting improvements to amenity. Please see our Planning pages for details of how to contact us.

We can issue a range of Fixed Penalty Notices (fines) for offences that can have a negative impact on the local environment; these include offences relating to litter, dog fouling, fly tipping, waste and abandonment of vehicles.

In the case of a littering offence we may take a photograph for evidential purposes, however, to issue a fine we only have to witness the offence - we may if it's safe and practical to do so pick up the litter as it may at a later date be used as an exhibit should a case go for prosecution.

The fines (or fixed penalty notices) that we issue for littering are as follows:

If fines are not paid within 14 days then we can take a prosecution through the Magistrates court for this offence whereby on conviction the maximum fine is £2,500.

To find out the cost of fines, please see Fixed Penalty Notice Fees for Littering

To find out how to pay your fine, please see:

Before we undertake any criminal proceedings in court we have to ensure that the case is in the public interest to prosecute. We may instead offer alleged offenders the opportunity to formally admit their guilt and accept a formal caution.

We use litter clearing notice to tackle the issue of litter on any land. It's a useful tool to ensure landowner and/or occupiers keep land tidy and clear of refuse.

Before a notice can be served, we must be satisfied that the land is defaced by litter in circumstances that are detrimental to the amenity of the locality. The notice must be served on the occupier or owner of the land.

The notice is to require the owner or occupier to clear the land of litter and if it's considered that the land is likely to become defaced by litter again, be required to take reasonable steps to prevent further incidents. This could be a small number of measures such as installing litter bins or setting up a maintenance/inspection rota for cleaning the site. Failure to comply with the notice can result in a fine.

We may also enter land for the purposes of clearing it and charge the landowner any costs incurred.

We work with land owners and occupiers to resolve the problems of litter. Litter clearing notices are not intended for people who have become victims of fly tipping.